It would be wrong to think of fleas as just a nuisance to us and our pets. Adult fleas are parasitic feeders that can transmit bacteria and disease due to their promiscuous feeding habits, drawing blood from humans and animals alike while moving from host to host. Fleas can live for about 100 days during which time the females produce 400-500 offspring. Once hatched, the worm-like larva live in crevices in the floor, under carpets and more often than none, in your pets bedding. Larvae feed on organic debris, particularly the faeces of adult fleas, which contain undigested blood. Of the nearly 100 different species of fleas found in South Africa, one species in particular is attributed to over 99% of the problems to humans and pets. 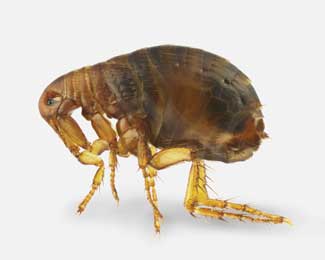 ‘Ctenocephalides felis’
Adult fleas are approximately 2.5 mm long and are dark in color, ranging from brown to reddish brown. Fleas are wingless, although they are capable of jumping large distances from host to host as a result of their six long legs. The bodies of fleas are thin and flat, allowing for easy movement through an animal’s fur. Their bodies are also covered in hair that serves to root them to the host. Adults have mouthparts which are used to extract the host’s blood.

DO YOU NEED PEST CONTROL SERVICES IN LOWVELD?

Call Pest Control Service now for your domestic and commercial pest control needs. We strive to get the job done by the most economical means, without any compromise for the possible hazard to people, property, and the environment. Contact us for expert advice.

We are registered with the Department of Agriculture, a proud member of SAPCA, Certified by PCSIB as per regulation 2(3)(c) Section 10 of Act 36 of 1947 and the Skills Development Act of 1999.

CONTACT US FOR ALL YOUR PEST CONTROL NEEDS IN LOWVELD

Our experienced team will deliver top quality pest control service to ensure your home, business or commercial space is free of pests.